Jaclyn Moriaty The Cracks in the Kingdom söyleşisi

Jaclyn Moriarty Talks About ‘Cracks in the Kingdom’

By DANA JENNINGS
APRIL 29, 2014, 2:11 PM
Jaclyn Moriarty, an Australian writer of young-adult fiction, has just published “The Cracks in the Kingdom,” the second volume in her lively and engaging “Colors of Madeleine” trilogy. Book 1, “A Corner of White,” was a Boston Globe-Horn Book honor title. The novels tell the story of a girl named Madeleine, who lives in our world, and a boy named Elliot, who lives in the Kingdom of Cello. They begin writing letters to each other through a crack that opens between their worlds — a crack in a parking meter.
Ms. Moriarty was born in Sydney in 1968, but also lived in Britain and Canada before moving back to Australia, where she now lives with her little boy, Charlie. Before becoming a full-time writer of books for young adults, she practiced media and entertainment law, but she always pined for the worlds of the printed page. Worlds like Cello.
Arthur A. Levine, Ms. Moriarty’s editor at Scholastic — for whom he also edits writers including J. K. Rowling and Philip Pullman — said, “It’s hard to make something fresh to me, but she has an almost magical ability to weave complex plots.”
Below are edited excerpts from an email conversation with Ms. Moriarty. 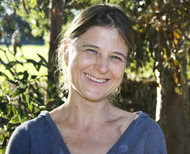 Nicola MoriartyJaclyn Moriarty
Q.
Why write fantasy in general?
A.
When I started writing this trilogy, I didn’t see it as fantasy. I’d always thought of fantasy as earnest stories set in forested worlds where boys go on journeys and have battles. I only liked those books when they were funny, or when the boy stopped in an inn for a night. I wanted him to stay right where he was, in the inn, drinking hot chocolate while his horse got watered and fed in the stables. I found the battle scenes tedious. But I’ve always loved books which are set in a real world with a magical edge.
Q.
What came first in “Madeleine,” Cello or the characters?
A.
The kingdom came first. It came to me while I was living in Montreal. I was in a cafe, working on a murder mystery. It was snowing outside and I had a chocolate croissant so everything felt magical to me. I started drawing pictures and maps of an imaginary kingdom. After that, for years I kept thinking about the kingdom. I tried writing about it five or six times before I realized I had to stop and come up with characters.
Q.
When did you start writing?
A.
I started writing stories when I was 6. That might have been because my older sister, Liane, wrote stories and I idolized her. And our dad used to commission us to write stories. We didn’t get pocket money, so that was the only way to make cash around my home.
Q.
Where did you get the idea of colors with “powers,” even lethal ones?
A.
I was in a cafe drawing pictures and maps of Cello, when a friend stopped by to say hello. He asked me what I was doing and when I told him he said, “What are your monsters?” He said, “You can’t have a kingdom without monsters.” After he left I looked at the colored pencils and markers rolling all over the table and decided that the monsters should be colors. 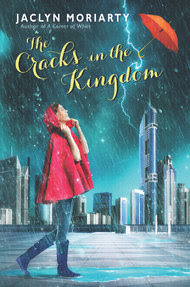 Q.
The books focus on family disconnections. Is that a preoccupation?
A.
My mother fostered babies when I was growing up, so I was constantly confronted by the various ways in which families can be broken. When I studied law my focus was on child and family law (as well as freedom of expression). So I guess family has always been a preoccupation. I have a 7-year-old son and, when he was four weeks old, my marriage broke up. I definitely became preoccupied with the idea of absent fathers.
Q.
Do you plan to write more fantasy?
A.
I have three book ideas: one is about a woman who starts attending seminars that will teach her the secret of human flight; one is about a time travel agency; and one is about a girl whose parents have been killed by pirates, leaving her detailed instructions for the delivery of a chest full of mystery gifts — so, I guess so.
Q.
Talk about being a daydreamer.
A.
I don’t think it’s all it’s cracked up to be. I’m always getting lost, or losing things, or sending my child to school with a project about pirates when this week it was supposed to be celebrations. And the more that technology and social media close in, the less space there is for daydreaming. You can’t interact with the world at the same time as drifting outside of it.
zaman: 05:14 Hiç yorum yok: Bu yayına verilen bağlantılar

TC Boyle The Harder They Come

THE BODY IN THE WOODS by April Henry
Kirkus, May 15, 2014 issue
**CONFIDENTIAL TO THE TRADE UNTIL May 4, 2014**
“A quick, thrilling read that doesn’t skimp on characterization.”
http://us.macmillan.com/thebodyinthewoods/AprilHenry

DINNER WITH THE HIGHBROWS by Kimberly Willis Holt
BCCB, May 2014 issue
“Brooker’s expressive oil illustrations capture the Highbrows’ high spirits (and Bernard’s reserve) in depictions as generous and colorful as their manners.”
http://us.macmillan.com/dinnerwiththehighbrows/KimberlyHolt

GRAVITY by Jason Chin
BCCB, May 2014 issue: 4th STARRED REVIEW!
« “The sort of mind-bending fantasy that will appeal to fans of David Wiesner. And it is, but Chin is also a dab hand at blending imagination with information, and to readers who watched him blithely flood the New York Public Library to further a marine biology lesson inCoral Reefs, it will come as no surprise that his universe-disturbing Gravity likewise delivers a solid science lesson.”
http://us.macmillan.com/gravity-1/JasonChin

FRED’S BEDS by Barbara Samuels
Kirkus, May 15, 2014
“Bold, bright illustrations have a fresh appeal, with juicy colors, varied perspectives and fanciful flowers, along with the drolly humorous beagle…Clever and charming.”

Publishers Weekly, April 25, 2014
“Fred’s travails, body language, and ability to make a bed out of just about anything make for entertaining reading, but it’s his mutually adoring relationship with Zelda that will resonate most strongly with young pet lovers.”
http://us.macmillan.com/fredsbeds/BarbaraSamuels

ON THE ROAD TO FIND OUT by Rachel Toor
Kirkus, May 15, 2014
“In a light and gently humorous romance, self-centered Alice learns to run, to cope with disappointment and to consider other people’s feelings…Warm, funny and wise.”
http://us.macmillan.com/ontheroadtofindout/RachelToor

QUEEN ON WEDNESDAY by Gabi Swiatkowska
Publishers Weekly, April 29, 2014: AUTHOR INTERVIEW (READ IT HERE!)
“Some manuscripts offer a lot of creative space, whereas others require a strict interpretation. The one interesting limit I find is my emotional reaction to a manuscript, which, curiously, implies very little or no wiggle room at all. This is not to say that I leave it altogether unchallenged, with various results.”
http://us.macmillan.com/queenonwednesday/GabiSwiatkowska

THE SHADOW HERO by Gene Luen Yang, illus. by Sonny Liew
Publishers Weekly, April 25, 2014: STARRED REVIEW!
« “Racism, romance, humor, and identity all play important roles in Yang and Liew’s evocation of Hank’s life in pre-WWII San Francisco as they create an origin story that blends classic comics conventions (at one point, Hank’s mother pushes him into a toxic spill in an attempt to give him superpowers) with a distinctly Chinese perspective.”

Kirkus, May 15, 2014
“Growing up in Chinatown, Hank Chu dreams of becoming a grocer like his father. His mother makes other plans for his future, however, after she sees the local, white superhero in action…An entertaining and intelligent response to classic superhero stories.”
http://us.macmillan.com/theshadowhero/GeneYang

THE GLORKIAN WARRIOR DELIVERS A PIZZA by James Kochalka
SLJ Fuse #8, April 21, 2014: REVIEW OF THE DAY (READ IT HERE!)
“[Kochalka’s] funniest and most ambitious bit of space-based lunacy to date…You can’t help but love a book where the Don Quixote of space is accompanied by a Sancho Panza-like talking backpack.”
http://us.macmillan.com/theglorkianwarriordeliversapizza/JamesKochalka

This new LEGO series is sure to spark imagination and encourage kids to think outside the box, which is the message that Sean strongly promotes about creativity, imagination, and building with LEGO.

COOL CARS AND TRUCKS
September 2009; 10 x 8; 32 pp.; Ages 4 – 8
Whether you’d like to build an SUV, an excavator, a tanker truck, or a race car, this hands-on book will show you how. You can create street scenes such as a construction site, a fire rescue, or even a family on moving day.
http://us.macmillan.com/coolcarsandtrucks/SeanKenney

COOL CITY
September 2011; 10 x 8; 32 pp.; Ages 4 – 8
Sean Kenney is back with original city creations of all sizes, colors, and features. Build a skyscraper, a brownstone, or even a mini metropolis! And as a special bonus--there's a sticker sheet included so builders can decorate their new city models.
http://us.macmillan.com/coolcity/SeanKenney

AMAZING ABC: An Alphabet Book
Board Book: July 2012; 6 ½ x 6 ½; 30 pp.; Ages 2 – 5
This alphabet board book of fantastic LEGO creations is specifically for toddlers. It’s a visual LEGO feast rather than an instructional book. The colorful, bold images are easily recognizable for the youngest LEGO enthusiasts.
http://us.macmillan.com/amazingabc/SeanKenney

Up next: COOL ANIMALS!

FUN FACTS:
• Sean has over 2 million LEGO pieces
• The biggest LEGO sculpture Sean ever made was a life-size polar bear, which took 95,000 pieces, 1,100 hours
• Sean’s largest exhibition, “Nature Connects” contains nearly 500,000 LEGO pieces and fills an entire 55-foot tractor trailer when touring the country. Nature Connects is an award-winning, record-breaking exhibition now touring the United States. Built from nearly half a million LEGO pieces, this show features 27 larger-than-life sculptures built with LEGO bricks by New York artist Sean Kenney. Walk under an 8-foot tall hummingbird, stand amidst a 7-foot rose, go nose-to-nose with a 5-foot butterfly, and then head over to the exhibit hallway and show us what you can make!
• He once built a 12-foot bridge on live TV in 2 hours

·         Sean created the cover of Parade Magazine to accompany an article about rebuilding America's schools. Parade is one of the most highly-circulated magazines in the US, (weekly readership of 70 million people).

·         PBS: "LEGO blocks are one of the most beloved toys in the world, playing a role in many a person’s childhood. But for some creators, LEGO has evolved from toy to art form. In this episode, we talk to three LEGO artists who have made beautiful mosaics, amazing stop-motion videos, thoughtful sculptures, and have turned these tiny building blocks into a true artistic medium." https://www.youtube.com/watch?v=2H4C5xZG_WU

PRAISE for Cool Creations in 35 Pieces:

Praise for Cool Cars and Trucks:

“Children who love cars, trucks, and LEGO blocks will find plenty to enjoy in this colorful book. . . . This visually engaging book will attract little ones interested mainly in looking at cars and trucks, as well as older kids, who may actually follow the directions and build some of the projects.” —Booklist

“The photos will inspire young builders. . . . This is just the type of challenge that enthusiasts are likely to enjoy. . . . For LEGO enthusiasts, future engineers, and reluctant readers, this is a colorful and inspiring book.” —School Library Journal

“It’s fun (and potentially inspiring) to see what can be created with a little imagination, an inclination for building things, and an unlimited supply of interlocking plastic blocks and widgets.” —Booklist

“Students will likely be fascinated with the details.” —School Library Journal

“Sure to delight.” —Publishers Weekly